The Caya® Diaphragm in combination with the Caya® gel offers a triple certainty:

This makes Caya® in combination with the Caya® gel a reliable contraceptive. Comparative clinical research shows that the contraceptive efficacy of Caya® is comparable to that of the traditional diaphragm.

The Caya® diaphragm is a completely unique barrier contraceptive and has been developed in the United States. Compared to the traditional diaphragms that were previously on the market for contraception, the pessary has undergone a revolutionary development with Caya®. Latex has been replaced by a silicone membrane, which means that women with latex hypersensitivity can also use Caya®.

The Caya® diaphragm is already being used by more than 100,000 women in the Netherlands and Germany, among others.

The Caya® diaphragm is produced in Germany by an ISO-13485-certified manufacturer and received CE certification as a Medical Device in March 2013.

If you wish to receive a comprehensive information folder or receive patient brochures as a doctor, you can request this via our contact page. 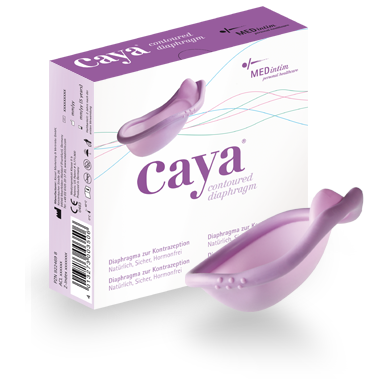